Rain, Rain, Go Away: Drainage Problems in the HOA 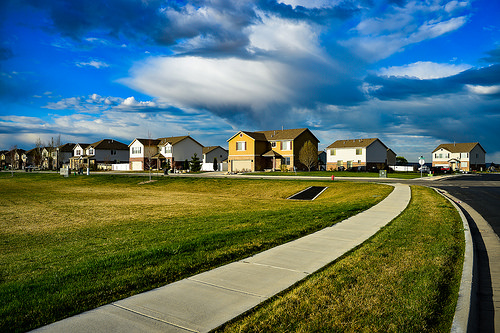 Drainage disputes among adjoining property owners are common anywhere developers subdivide and build on land. Raw land’s natural grading channels surface water into streams and rivers. Development plans frequently ignore potential drainage problems and construction disturbs drainage patterns, often causing water to divert or accumulate. When buildings and hardscapes replace trees and grass, soil cannot absorb water. Instead, the grading of the road, sidewalk, eaves or gutters channel water. All rainwater has to go somewhere. Unless a house or other building is on the top of a hill, a property owner may suffer from surface water diverted from adjoining parcels.

State common law governs the rights and responsibilities of adjoining property owners regarding surface water diversion. In residential neighborhoods, HOA roads, greenspace and other common areas encompass owners’ lots. Many lots lie at lower elevations from neighbors or common areas. Even if a developer constructs the subdivision according to an acceptable drainage design, all it takes is one neighbor or HOA board that improperly maintains or modifies drainage features to cause nuisances at lower-lying homes.

In Virginia and elsewhere, adjoining property owners are not strictly liable for damage or interference caused by changes they make to drainage conditions on their own property. Courts apply a reasonableness standard, but the burden is on the aggrieved neighbor to prove that the diversion of water is improper. The Supreme Court of Virginia’s judicial precedents provide guidance as to whether damaging changes to grading conditions on an adjoining property subject that owner to liability.

One leading Virginia case is Kurpiel v. Hicks. In 2011, Patricia and George Kurpiel of Stafford County sued their adjoining neighbors, Tammy and Andrew Hicks. The Kurpiels alleged that the Hicks stripped their land of vegetation, changed the elevation of their land, brought in additional fill dirt and caused stormwater, sediment and siltation to flow onto the Kurpiel lot. The Kurpiels sued the Hicks for trespass, requesting the Circuit Court to enter an injunction against the flooding.

Under Virginia’s common law, the courts view surface water as a “common enemy.” By general rule, owners may “fight off” surface water by construction or changing drainage conditions to their own property, even if this discharges additional water onto an adjoining parcel. This recognizes the higher landowners’ freedom to make changes to their land, within reason. The focus of this blog post are the exceptions to the common enemy doctrine, and how such exceptions may be tools to adjoining owners.

The “common enemy” doctrine’s main exception provides that diversion of surface waters may not be done wantonly, unnecessarily, or carelessly, must not injure the rights of another, and must be a reasonable use of the land exercised in good faith. Whether any exception applies will depend upon each case’s unique facts. Many cases require the testimony of an engineer or another expert to professionally evaluate the sufficiency of drainage. Because the exception to the “common enemy” doctrine is fact specific, the reasonableness of the adjoining owner’s changes present a factual question to be decided at trial.

To sue an adjoining owner for flooding, the aggrieved party must choose one or more claims or “causes of action.” The “common enemy” doctrine applies regardless to whether the lawsuit is for trespass, nuisance or negligence. The adjoining owner may also be able to sue for violation of restrictive covenants recorded in the land records. The Kurpiels only sued for trespass, which provides that every owner is entitled to the exclusive and peaceful enjoyment of their own land, and redress if such enjoyment shall be wrongfully interrupted by another.

The Circuit Court of Stafford County dismissed the Kurpiels’ lawsuit on the grounds that it failed to allege sufficient facts to establish the “reasonableness” exception. The Supreme Court of Virginia reversed the decision, finding that the Circuit Court improperly short circuited the case, finding reasonableness of surface water diversion to be a factual issue for trial.

“Unreasonableness” is not the only exception available to flooded neighbors. The Supreme Court of Virginia held in other cases that a landowner cannot collect water into an artificial channel or volume and pour it upon the land of another to his injury. As one example, an owner cannot drain surface water into a ditch or pipe and aim that artificial channel onto an adjoining property.

An additional exception is where the flow of water is in a defined channel or watercourse. In that instance, a landowner may not injure another by interfering with its natural flow.

The afore described rule and exceptions define the obligations that adjoining property owners have to one another that arise where there are no covenants of record regarding nuisances and drainage. Most residential subdivisions have restrictive covenants, and many establish HOAs. Those covenants may include provisions regarding nuisances or other restrictions on how an owner may divert water. Those covenants will define the HOA’s rights and obligations to maintain common areas and rights of way. Some covenants contain provisions inserted in attempts to limit the liability of the homeowners association for property damage from stormwater problems. If the flooding comes from an adjoining lot or an HOA common area or road, the aggrieved lot owner needs copies of the declaration of covenants and any amendments to determine how they may add or subtract from the adjoining owners’ rights and responsibilities in dealing with the “common enemy.”

Courts do not apply local government-type legal standards in evaluating HOA actions. Also, courts do not interpret restrictive covenants encumbering real estate according to the general rules regarding garden-variety contracts. There are a few basic principles to consider when interpreting HOA covenants:

HOA directors frequently misunderstand their rights and duties. Many falsely believe that once the members elect the board of directors, they enjoy unfettered exercise of business judgment. Some believe that a lot owner can’t challenge decisions outside of the next election. Many HOA boards believe that when they award a contract to maintain or renovate a road or drainage system to the lowest bidder, lot owners can’t complain. This is not true. The HOA must fulfill the requirements imposed upon it by the declaration. The HOA, as a fiduciary, cannot show favoritism towards certain owners over others, and divert flooding away from one lot onto another lot. The HOA is liable in contract for failure to fulfill obligations clearly established by the declaration.

Under Virginia law, the fundamental purpose of a property owners association is to collect assessments from lot owners and spend those receivables on maintaining the common areas, such as roads, greenspace and drainage improvements. The Supreme Court of Virginia has held that if the declaration fails to require this, the governing body established by the covenants may not qualify for the various remedies and powers established by the Property Owners Association Act. This rule is consistent with federal law requiring community or public purpose for the spending of HOA assessments to preserve tax exempt status. It is often difficult for a HOA board evade its duties to maintain the common areas it owns.

If an HOA or adjoining neighbor makes changes to their property that causes a flood, the damaged landowner has rights. When the stormwater diversion is harmful, usually there is at least one legal theory by which the adjoining owner or HOA may be held accountable. Flooding of houses, yards and driveways is a nuisance that no landowner should have to live with.

How to Fire a Contractor