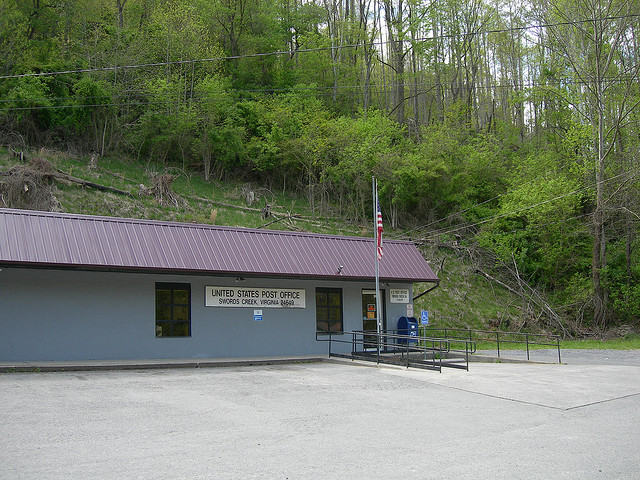 Real Estate Decisionmaking in the Face of the Unknown

Eight months ago, I posted about a January 10, 2014 Supreme Court of Virginia opinion interpreting ambiguous words of conveyance in a Southwest Virginia coal severance deed. In CNX Gas Company, LLC v. Rasnake, the Court decided that CNX had the right to continue to extract the Coal Bed Methane from a tract of land in Russell County. The Court interpreted language limiting words of conveyance in a 1918 deed so as not to include CBM. A land conveyance represents real estate decisionmaking in the face of the unknown future.

On September 12, 2014, the Supreme Court of Virginia issued another opinion relating to CNX’s extraction of CBM from Russell County coal fields. Swords Creek Land Partnership v. Dollie Belcher, et al., interprets words of conveyance and the difference between CBM and coal. This case caught my attention because it discusses the Rasnake case. It also so happens that in the past year, “Words of Conveyance” was the most common term entered by all of you into the search feature of this blog.

Like Rasnake, the Belcher case concerns an (1) 1887 conveyance of coal, (2) from a land in Russell County, (3) to Joseph Doran and W.A. Dick, (4) whose successors in interest leased the CBM extracting rights to CNX Gas. Despite the factual similarities, the outcome of the two cases is different, because each deed contains different granting language.

. . . all of the coal, in, upon or underlying a certain tract of land and the timber and privileges hereinafter specified as appurtenant to said tract of land [metes and bounds description follows] to enter on, over, upon, and through said tract of land for the purpose of digging, mining, or otherwise securing the coal and other things in and on said tract of land hereinbefore specified, and removing the same from off said land . . . .

Ms. Belcher and two others are the successors in interest to the Richardsons. Swords Creek entered into a lease in 1991, granting the CBM to CNX’s predecessor in interest. Swords Creek receives 12.5% royalties from CNX.

Belcher and the other surface owners brought suit claiming rights to the CBM. In September 2013, the Circuit Court of Russell County entered an order finding that Swords Creek only had rights to coal, not to the CBM.  Nine years before, the Supreme Court of Virginia decided that the term “coal” as used in the 19th century unambiguously referred to the mineral coal. In Virginia deeds from the 1800’s, CMB is a separate mineral estate from coal.

In upholding the Circuit Court’s decision, the Court discussed the Rasnake case, in which the granting language was deemed ambiguous. In Belcher, the Court found the words of conveyance to unambiguously convey only coal and timber, not including CMB. The Court found Belcher, et al., entitled to all of the royalties from the CBM.

What do Rasnake and Belcher add to what we know about words of conveyance in Virginia? My previous post discussed some of the key technical rules for construction of deeds. Today’s post adds two considerations at a higher-level of analysis: 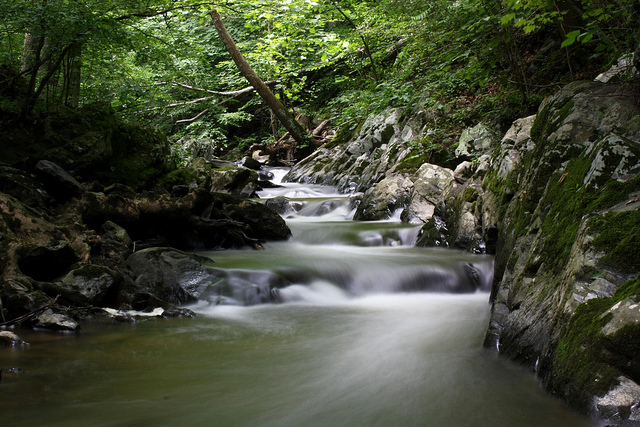 Court Confirms Border Between Maryland and Virginia is Changing

The boundary between Maryland and Virginia has been the subject of legal disputes for hundreds of years. On August 29, 2014, the Maryland Court of Special Appeals added another chapter to this “meandering” tale. The Court issued an opinion in a dispute over rights to certain waterfront property near Harper’s Ferry, West Virginia. River Riders, Inc., is a fishing, tubing and rafting tour company doing business in the “Potomac Wayside” area (pictured) along the southern bank of the upper Potomac River. Potomac Shores, Inc. claims the Potomac Wayside tract through their Washington County, Maryland, deed describing the south side of the Potomac as a boundary line. Potomac Shores asserts the parcel is in Maryland, because that geographic area was in the Potomac River before gradual accretion of the shoreline. From Potomac Shores’s perspective, that accretion is their windfall, not River Rider’s. Potomac Shores brought their title lawsuit in Washington County, Maryland. River Riders moved to dismiss on the grounds that the Potomac Wayside land is located in Loudoun County, Virginia, not Maryland.

I became interested in Maryland history during my undergraduate years in Annapolis. In 1996, I had a summer internship with the National Park Service in Sharpsburg, a small town in Washington County, Maryland. Harper’s Ferry remains one of my favorite day excursions, a beautiful spot where the Shenandoah River flows into the Potomac. This is where Maryland, West Virginia and Virginia meet. Along the Maryland side, the C&O Canal towpath offers a flat, scenic hiking and biking trail. Certainly an attractive area for entrepreneurs to base a river tourism business.

The historic Maryland-Virginia border disputes cover a spectrum of issues. Before this latest Maryland lawsuit, most disputes focused on use of oyster beds in Bay tidal areas. The passion for shellfish amid confusingly defined property rights repeatedly escalated into violence between Maryland and Virginia watermen. In 1874, Maryland and Virginia agreed to submit the boundary dispute to arbitration to resolve the matter peacefully.

The Potomac River is part of Maryland and the state boundary runs along the low-water mark on the Virginia side. What happens when this line moves? The Maryland Court of Special Appeals articulated the legal question as follows: “Does the boundary between Maryland and Virginia shift as the south bank of the Potomac alters because of time and the forces of nature? Or is the boundary fixed and immutable?” Potomac Shores argues that the boundary was set in the past and the gradual process of accretion, erosion and relection resulted in “new” land formed on the south bank of the Potomac.

Note that it has long been settled that the Potomac River is freely navigable by the citizens of the states, and that the waterfront property owners have rights to build docks and wharfs out into the river, as permitted under land use restrictions.

The conclusion reached by the Maryland Court of Special Appeals runs contrary to our modern preference towards “precision.” The Court rejected the “fixed boundary” approach requested by Potomac Shores. The Court upheld the Circuit Court decision, finding that, for the non-tidal portion of the Potomac River, the boundary shifts as time and the forces of nature gradually re-shape the low water-mark of the river’s “southerly shore.” This implies that the border between Maryland and Virginia is changing, by acts of nature, not government. This also means that those private landowners along the Maryland-Virginia border also have potentially shifting boundaries. Virginia’s Potomac waterfront landowners above Washington, D.C., may loose or gain waterfront property as the currents withdraw, add or relocate the shoreline.

The court’s decision avoids the problem of defining the water line boundaries as those that existed at a certain point of time in the past, such as a land grant or other legally significant document.

The new court opinion observes that the result of the case may be different if the accretion of the Potomac Wayside property was man-made. The opinion does not discuss waterfront landowners planting vegetation, constructing sea walls and laying rip-rap to protect their properties from natural change.

The Court analogizes state boundary lines and individual property boundary lines, quoting Justice Kennedy’s dissent in an older Virginia v. Maryland boundary case: “No court acts differently in deciding on Boundary between states, than on lines between separate tracts of land.” For example, the arbitrators in 1874 observed that, “Virginia’s prescriptive use of the river’s south bank had changed the boundary to the south bank’s low-water mark for the course of the entire river.” What is prescriptive use of real estate? Professor Minor defined it in his 1908 treatise as, “based upon the presumption of a grant, arising after long-continued, adverse, uninterrupted, notorious, exclusive enjoyment of a right in the land of another, under a claim of title.” The presumption becomes conclusive after twenty years. Was the arbitrator’s reference to the doctrine of prescriptive easements appropriate? Or is it a red herring?

The border between Maryland and Virginia is changing – is your boundary meandering as well? If you are currently experiencing a dispute with one of your neighbors concerning a property boundary defined by a river, stream, lake or other waterway, consult with a qualified attorney in order to explore your options to protect your rights. 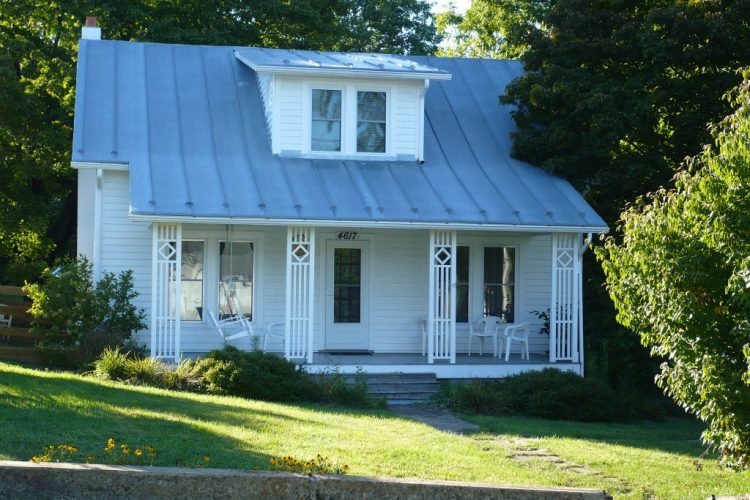 Accepting a New Contract During an Earnest Money Deposit Dispute

On July 31, 2014, I posted about a recent Fairfax Circuit Court opinion concerning Earnest Money Deposits (“EMD’s”). The seller, Sagatov Builders, LLC, sued buyer Christian Hunt. Mr. Hunt had entered into a contract and later failed to make the EMD or complete closing. The Court refused to allow the seller to sue the buyer for the unpaid deposit amount, finding it to constitute an unenforceable penalty.

Recently, an anonymous visitor typed a question into the search feature of this blog, rephrased as follows: “If there is a pending dispute over an EMD, can the seller accept another contract on the same property?” In other words, what are the risks of having two unreleased contracts simultaneously on the same property? In the Sagatov case, the seller used a marked-up, outdated realtor association form as a template for a transaction conducted apparently without brokers. Since the buyer never made the EMD, that wasn’t a classic earnest money dispute. The visitor’s question intriguingly takes a step back and asks how the EMD dispute implicates fundamental contract issues.

Today’s post explores this visitor’s question. This reminds me of a personal experience I had over a year ago. My wife (then fiancée) and I were under contract to purchase a home in Fairfax County, Virginia. We made the EMD. Our home inspector discovered a below-grade crawl space suffering from significant water intrusion problems. Our agent provided our home inspection report to the seller along with a request for release of the EMD. We resolved the dispute by using the home inspection contingency to get out of the contract. We were able to get our EMD back without having to send lawyer letters or go to court. Once we decided to ask for the release, we didn’t care what the sellers did with the house once we moved on, so long as we weren’t involved. However, some buyers may attempt to tie up the disposition of the real estate in order to gain leverage in getting their EMD back. Buyers and sellers can disagree over whether a contingency is still available.

While the circumstances and wording of each contract dispute are different, this visitor’s question brings a few thoughts to mind:

In the event that parties to a real estate sales contract cannot amicably resolve disputes over the disposition of the property or the EMD, they are well advised to contact a qualified attorney for counsel and representation.

I took the featured photograph in Shenandoah County, Virginia. It is just for fun and does not depict any of the properties discussed on this blog.