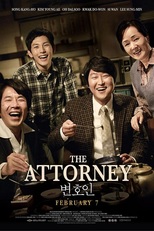 Before Roh Moo-hyun became a human rights advocate and President of South Korea, he was a lawyer in private practice. Director Yang Woo-seok loosely based the 2013 Korean movie The Attorney (Byeon-ho-in) on Mr. Roh’s early career. After a blockbuster run in S. Korea, “The Attorney” now appears in American theaters. On Presidents Day, my wife and I watched this film, coincidentally featuring a foreign president. “The Attorney” has his weaknesses, but captures what it means to be an advisor, entrepreneur and advocate.

Song Kang-ho plays lawyer Song Woo-seok, a fictionalized, young Roh. Mark Jenkins observes that “The Attorney” begins as a comedy about a pioneer in land registration practice in Busan, Korea. Like a lawyer changing focus mid-trial, director Yang shifts gears in the middle of the film. Song accepts the defense of a young waiter who, after brutal torture, “confessed” to fomenting overthrow of the government. See Mark Jenkins, Feb. 6. 2014, Wash. Post, “‘The Attorney’ Movie Review: An Earnest and Instructive South Korean Box-Office Hit.”

Part One of this blog series focuses on Song’s success building a residential settlements practice. Part Two will focus on his trial preparation and advocacy for victims of human rights abuse.

Song pulls himself by his boot straps by maintaining a positive outlook. Before Song conducted legal settlements of homes, he literally built them. When I watched this film, I personally identified with the title character. After a day on the job, Song washes the construction site grime off his hands and starts to study. Your humble blogger worked as a laborer for a construction company during his college years. Song studied law in the evenings in neighborhood restaurants and unfinished buildings. I attended law school in an evening program while working a normal day job. A few years ago, I discovered culinary gems in Northern Virginia’s Korean restaurants. The restaurant scenes in the movie made me feel hungry!

After dinner at a restaurant managed by Choi Soon-ae, Song skips out on the bill. The dinner money goes to buy back his pawned law books.  Song motivates himself by writing “Never Give Up” on the textblock of his books and into concrete facades at work sites. Song has little education or money to support his family or pay his debts.  He uses “Never Give Up” to reinforce a positive outlook in the face of adversity. Writing or sharing a constructive affirmation can overcome self-doubt or the negativity of others.

After passing the bar, Song receives a judgeship. Struggling to support his family, he resigns to found a real estate registration practice. This practice is similar to that performed by title companies and settlement agents in the U.S. Song capitalizes on a rule change authorizing attorneys to do work previously restricted to notaries public. Initially, his bar association colleagues scorn him for doing work they consider beneath them. At a bar meeting, he overhears them gossiping as they sit down to eat at his table. They complain that he is out meeting people and handing out business cards. Unperturbed, Song introduces himself and hands out his cards.

After Song finds financial success, his rivals follow him into this practice area, competing for the same customers. He reinvents himself again as a tax law advisor. Song’s vision and lack of pretension distinguish him from his colleagues. He fit his own background and talents with a high-volume consumer practice. Years after failing to pay the dinner bill, the new attorney returns to Mrs. Choi’s stew-house to repay his debt. She refuses, with motherly joy for a prodigal patron, insisting that he become a regular customer.

“The Attorney” features a foreign legal system and a different culture. I relied on the subtitles to follow along. In spite of cultural and linguistic barriers, the first half of the movie shows universal entrepreneurial strategies. Another WordPress blogger, Seongyong, has great photos from the film in his post.

In the first part of the film, the director develops Song’s character as worldly, warm & family-oriented. In the second half, Song puts his career, reputation and safety on the line to oppose anti-terrorism charges based on confessions procured by torture of the client. Stay tuned to the next blog post!

Reel Property: "The Attorney" and the Appearance of Justice