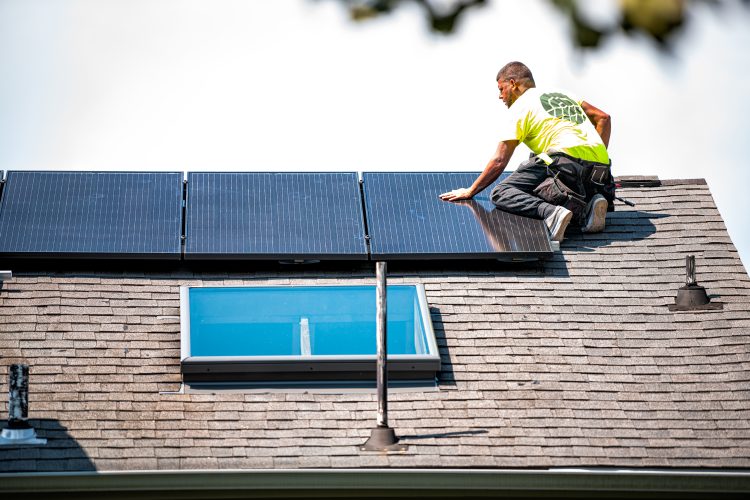 Sales associates for solar energy companies get excited every time the general assembly changes the laws facilitating new solar energy systems. Some of them print out copies of the statutes to hand to homeowners with doubts whether their HOA would allow them to install solar energy systems. But be careful about the Free HOA law advice of solar companies. Salespersons for solar energy companies are not reliable interpreters of community association laws. The addition of solar panels in residential communities can be controversial when the legal reforms come years after the developer recorded covenants that impose restrictions on such systems. Some people view solar energy systems as desirable; others see them as an eyesore, many do not care one way or the other. Personally, I don’t own any but think that they are a good thing. What should a homeowner do if she wants to buy solar panels but the HOA leaders and the company’s reps are saying different things about the legalities?

The Virginia Property Owners Association Act contains amendments regarding solar collection equipment that are similar to HOA laws in other states. The statute reads, “No association shall prohibit an owner from installing a solar energy collecting device on that owner’s property unless the recorded declaration for the association establishes such a prohibition.” Va. Code § 55.1-1820.1(B). The recorded declaration is the central governing document that the courts treat as the “contract” between the lot owners and the boards and committees of the HOA. How could a HOA enforce such a prohibition if the declaration did not provide such? The POAA also allows the HOA board to adopt rules and regulations governing the use and improvement of lots in the subdivision, if the declaration so allows. So, what happens if a HOA tries to restrict solar panels through architectural handbooks or other resolutions? This POAA amendment goes on to say that “However, an association may establish reasonable restrictions concerning the size, place and manner of placement of such devices.” Va. Code § 55.1-1920.1(B). Many people, on both the “pro-HOA” and “anti-HOA” sides of the debate are attracted to laws that require HOA action to be “reasonable.” However, parties frequently litigate over whether something is “reasonable.” Ordinarily, the courts to look to the language of the statutes and recorded instruments themselves to determine what “reasonable restrictions” might mean in a given context (and not apply a generic view of what is “reasonable”).

The POAA solar amendment goes on to talk about what is reasonable: “A restriction shall be deemed not reasonable if application of the restriction to a particular proposal (i) increases the cost of installation of the solar energy collection device by five percent over the projected cost of the initially proposed installation or (ii) reduces the energy production by the solar energy collection device by 10 percent below the projected energy production of the initially proposed installation.” Va. Code § 55.1-1820.1(C).  Additionally, the owner has to produce a report by a qualified expert that satisfies the HOA that the restriction is not reasonable.

Why would the state legislature enact a law written this way? This is my blog, so I get to speculate if I want. I suspect the solar energy industry and the HOA industry got together and developed legislation that contained language that both sides wanted, with insufficient thought as to how this would impact lot owners and architectural committees in the real world.

In 2019, the Court of Special Appeals of Maryland considered a case where a homeowner installed solar panels without first obtaining HOA approval, and then tried to use Maryland’s similar version of HOA solar amendments to defend against covenant enforcement. Stoneridge at Fountain Green HOA wanted Jonathan and Megan Blood to remove the solar panels from the front side of the roof of their house in Hartford County, consistent with its desire to keep panels off of the front of houses. The Bloods argued that while they were supposed to apply to the HOA beforehand, they believed that their contractor would do that for them. The Bloods tried to defend the HOA lawsuit by arguing that to remove the panels from the front of their house would unreasonably increase the cost of decrease the efficiency of the solar collection equipment. At trial, the Vice President of the solar panel company testified that reducing the number of panels from 48 to 33 would reduce the systems performance and efficiency. In its analysis, the appellate court observed that the statute didn’t adequately define “cost” or efficiency”. The court found that there was no evidence that restricting the number of panels would increase the cost of the system (larger systems cost more, not less?). The court also found that reducing the size of the system made it produce less electricity, but didn’t make it less operationally efficient. The Court found that because the Bloods were supposed to obtain approval first, they can’t really argue that being forced to remove some of them was a kind of waste prohibited by the statute (the rule breaker should not get to keep what they built just because it would waste money to demolish part of it?). The court concluded that the Bloods’ reading of the statute would make any HOA limitations on solar equipment unenforceable because any rule that made the system smaller would result in a loss of cost savings that could be derived from more solar panel coverage.

The Stoneridge at Fountain Green HOA v. Blood case illustrates how these statutes don’t provide homeowners with as nearly the legal protections that some people think they do. The statutes aren’t really substantive rules, they are provide instructions on as how to interpret HOA governing instruments. However, the solar industry didn’t lose, they still have a statute that they can point to during their sales process with lot owners. In these situations, lot owners have to be very circumspect, because HOAs are apt to overstate their powers and adopt rules that are unenforceable (or unenforceable in the way that the HOA is trying to use them in a given instance). At the same time, a wise lot owner ought not to rely upon the legal advice of the company who is trying to sell them something. Unfortunately, some HOAs will adopt rules and make architectural decisions in an informal fashion, where they expect lot owners to live with decisions made during backyard BBQ’s or hurried email exchanges that don’t properly observe the statutes or recorded instruments that give them authority.

Note: The photo associated with this blog post is a stock image that doesn’t depict anything discussed in the article.

Is There Cancel Culture in Homeowners Associations?