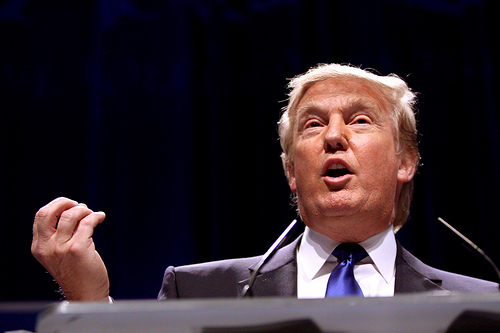 Donald Trump’s colorful background in the business of condominium development speaks volumes about two topics:  (1) his track record as a real estate developer, and (2) the weaknesses of the community association model of real estate ownership.  There are many commentators writing about the political nuances of Trump’s 2016 presidential campaign.  Words of Conveyance is not a political blog.  Instead, this post focuses upon a recent federal lawsuit involving the Trump Organization that illustrates a few risks in condominium ownership. Donald Trump is in the condominium business but he does not trust owner associations.  As it turns out, Mr. Trump litigates in a similar way to his political campaigning.

Jacqueline Goldberg is a Certified Public Accountant who has invested over $10 million in real estate rental properties.  A Trump-controlled developer made condominiums available in the Trump Tower in Chicago, Illinois.  The Chicago Trump Tower’s 92 stories enclosed 486 residential units and 339 hotel condominium units.  In 2006, Ms. Goldberg signed contracts to purchase two hotel condominium units as investments.  Their prices were over $1.2 million and over $971,000, respectively.

The marketing materials used Mr.  Trump’s personal brand to illustrate his personal involvement as an established, famous and successful developer.  The Chicago Trump Tower advertised luxury amenities including a 60,000 square foot health club, concierge, laundry, garage, meeting rooms, ballrooms with 30 foot ceilings, storage areas, and an executive lounge as common areas of the condominium association.  Since this was a hotel condominium, these common areas would be income generating assets and not merely perks available to owners or their tenants.  The declaration is the essential document that defines these respective property rights of different owners in the association.  This document defines which real estate elements are exclusively or commonly owned.

While the hotel condominium units in the Trump Tower were more expensive than most detached single family dwellings, Ms. Goldberg’s purchase contracts had some language that would make many real estate people nauseous.  The agreements provided that the, “[s]eller reserves the right, its sole and absolute discretion, to modify the Condominium Documents.” The Condominium Documents include the declaration, bylaws and floor plans.  The purchase contract only required Ms. Goldberg’s approval to change the Condominium Documents when specifically required by law.  Her risk was that the contract language gave Trump the unilateral authority to change the material terms of the deal.

After signing the purchase agreements, Ms. Goldberg learned that the Trump Organization made subsequent changes to the Declaration, removing the health club, concierge, laundry, meeting rooms, ballrooms, storage areas and executive lounge from the association’s common areas.  Perceiving a “bait- and-switch,” Ms. Goldberg refused to go to closing on the sale of the two units.

When the Trump Organization refused to return her $516,000 earnest money deposits, Ms. Goldberg filed a lawsuit.  The principal theory of her case was that the developer defrauded her by including the later-removed elements in the original package while never intending to keep them as common elements of the hotel condominium association.  In his defense, Mr. Trump insisted that the association could not be trusted with management of these elements of a mixed-use development:

Mr. Trump, a self-described “expert” on condominium developments, testified that based on his experience, he went into the Trump Tower project aware that “it can be very difficult” for a condominium board to manage function rooms, ballrooms, and food/beverage operations.  Mr. Trump explained that, as a general matter, condominium associations “can change their mind,” “fire managers,” “do lots of different things to create tremendous turmoil,” and “really ruin the operation very easily.” He further explained that if a condominium association fired a manager, “[i]t could become a disaster.”  This “has happened before, many times, where condo boards are involved and they can’t make a decision, they can’t hire a manager, and the whole thing goes to hell.”  This may affect not only the stability and profitability of the building, but also the Trump Organization.

Mr. Trump argued that these elements were originally included as common elements only as an oversight.  When he later figured this out, he transferred them over to one of his companies in order to prevent some association board of directors from ruining the Trump Tower for everyone.   To anyone unfamiliar with Mr. Trump’s personal bravado, these comments would sound outrageous.  How can a developer strong-arm luxury, income generating amenities away from a group of unit owners in the name of “protecting property values” against the incompetence of their neighbors? Yet, in Goldberg’s case, this argument worked.  Trump won the 2013 jury trial in the U.S.  District Court for the Northern District of Illinois.  Goldberg then appealed to the Seventh Circuit Court of Appeals.  Judge Richard Posner, a well-known federal appeals court judge, wrote a June 10, 2014 opinion affirming the trial court decision.  He had some interesting observations about this case:

For most people, opportunities to invest in condominium units do not involve the complex issues found in a Trump Tower.  However, even commonplace initial purchases of units from a residential condominium developer involve substantial risks.  One cannot conduct home inspections for properties that have not yet been built.  The developer (or some other investor) may enjoy an oppressive supermajority vote in the governance of the owners’ association.  There may be ambiguity in the Condominium Documents.  Since seasoned investors like Jackie Goldberg experienced heartburn, there’s all the more reason for others to have advisors help them navigate such an investment.  In a post-trial interview with the Chicago Tribune, Goldberg said she felt good about “exposing” Trump and offered this advice for anyone going into business with him: “Read the contract.”

As a presidential candidate, Mr. Trump lacks political electoral experience.  However, the Goldberg case shows that Mr. Trump does have a governance background within his real estate dominion.  Industry people espouse that community associations are “mini-governments” that alleviate the burdens on cities and counties while permitting neighborhoods to enjoy autonomy on how things are run on democratic principles.  If condominium associations are indeed analogous to political democracy, what does Ms. Goldberg’s case say about how a Trump White House would treat other organs of government?

Do Your Association’s Parking Rules Pass the Smell Test?