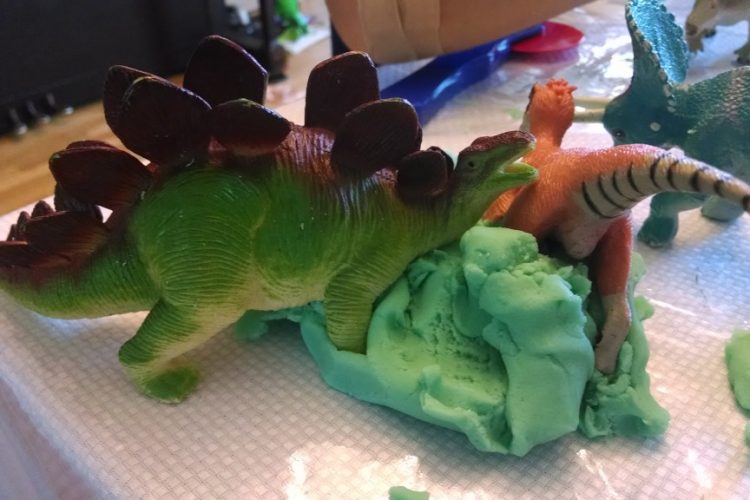 Are Dinosaurs a Nuisance or Merely Provocative?

My 4-year-old nephew loves dinosaurs. His favorite is the Triceratops. Before my sister gave birth to her second son, their family discussed names for the new baby. My nephew wanted to name his little brother “Brachiosaurus.” Needless to say, his parents outvoted him on that! He would love to live in the New Territory Residential Community Association in Fort Bend, Texas.In New Territory, Nancy Hentschel pastured two large dinosaur sculptures in her front yard. The Tyrannosaurus Rex and Velociraptor caught the attention of her neighbors and news organizations. The response was overwhelmingly positive. Hentschel reported that, “I’ve never had so many people knock on my door, say hello, tell me they love the dinosaurs, and as if they can take pictures.” The “dino duo” received hundreds of likes on social media. Her HOA sent a disapproving notice stating that she violated the rules by erecting an unauthorized “addition” to her home. Are dinosaurs a nuisance? Hentschel admitted that she knew that the HOA would object to the statues when she bought them. “This is a form of art but it is also a form of protest.” In a September 12, 2015 interview with Shu Bartholomew on the radio show, “On the Commons,” Hentschel described an earlier dispute she had with her Board of Directors. The HOA’s leadership cited her for having a

crack on the surface of her own driveway. The board members went so far as to come to her property and get down on their hands and knees to measure the crack for purposes of issuing the violation. Hentschel protests the use of HOA authority to create fear in her community. In her interview, she remarked about how it’s not conformity and uniformity that create property values or a sense of community.

My wife and I have cracks in our own driveway. They were there when we purchased the property. They didn’t factor much in our decision to buy the house. I’m sure that other prospective purchasers didn’t care much about the driveway cracks either. Sometimes I think that I’m the only person who ever notices them. Although we live on a busy street, I’ve never had a neighbor or visitor complain about them.  When I applied crack filler a year ago, the compound cracked when it dried. Once a concrete or asphalt surface has cracks, winter ice can freeze in it, causing the surface to progressively deteriorate. As someone who drives into the District of Columbia regularly, I am stridently anti-pothole in my political outlook. Somehow, I suspect that the motivation of Ms. Hentchel’s board was not a paternalistic effort to save her family from future potholes in her driveway.

Hentschel is not the first homeowner to violate a HOA rule in intentional protest or knowing indifference to HOA rules. Sometimes homeowners deliberately paint their house in an unsanctioned color. Others erect American flags or religious symbols in attempts to exercise freedom of speech. Hentschel’s dinosaur display is different. Her “civil disobedience” is not manifested in mundane details like trash can storage or serious concerns about expression of core personal commitments. Instead, she her display is humorous and fun.

When I first heard about the Texas Dinosaur controversy, it reminded me of Dinosaur Land here in Virginia. The Shenandoah Valley is a tourism hot-spot. Dinosaur Land is a roadside attraction near Winchester, Virginia. For around $5 a person, tourists can tour a private park with dozens of large dinosaur statues. It’s been in business for decades (statues are easier to care for than live creatures). You can imagine the kid appeal. After a day of following one’s parents around civil war battlefields and nature sites, the novelty of dinosaurs is irresistible. People are willing to pay to take their children to see this, at least once. In Texas, Ms. Hentschel has created a small-scale Dinosaur Land in her front yard. She isn’t charging anyone any fees. In fact, as of September 12th she had a waiting list of neighbors who want to borrow the dinosaurs to graze on their own lawns. She only asks them to make a $50.00 donation to a charity of their choice. In my opinion, by keeping the dinosaur statues as livestock, Nancy Hentschel made her community more desirable, at least for now. This makes her dispute with her HOA interesting from a property rights perspective. What she’s doing looks like a lot of fun, although she must be prepared to pay the price if her HOA decides that they don’t care about public perceptions and decides to go full force in litigation. That’s something one has to be ready for when breaking the rules to prove a point. Don’t try this at home, kids.

Hentschel’s dinosaurs are a fun twist on the “spite fence” phenomenon. Periodically neighbors end up in litigation because one or both of them set up a fence or other structure for the purpose of harassing, intimidating or displeasing their neighbor.  In 2007, one of these went up to the Supreme Court of Virginia. Thomas and Teresa Cline lived in Augusta, a rural county in Virginia. The Clines had a history of disagreements with their neighbor Roy Berg. Berg decided to construct an 11 foot tall tripod with motion sensors and floodlights pointing at the Clines’ windows. To make things even creepier, Berg installed surveillance cameras to watch the Clines on his television. After Berg refused to take down the floodlights and cameras, the Clines constructed a 32 foot high fence made of 20 utility poles. They attached plastic sheeting to the poles to block the intrusive lights and cameras. Berg sued the Clines, alleging that the fence was a nuisance to the community. The Clines asserted an “unclean hands” defense. They argued that the surveillance and floodlight apparatus disqualified Berg from asserting the nuisance claim. The county court found in favor of Berg and ordered the Clines to remove the fence because it was an eyesore. The Supreme Court of Virginia reversed, finding that the judge should have applied the doctrine of “unclean hands” to dismiss Berg’s suit. Cline v. Berg illustrates the difficulties inherent in these intractable neighbor disputes. In efforts to get it right, Courts can struggle with the question of who to punish and how. If Berg’s case is dismissed, then both of the spite structures would remain. No problems are solved. If the Court orders the Clines to remove the fence, then they are punished for their “eye for an eye, tooth for tooth” reaction. However, the lights and cameras would remain a problem.

Contrast the structures in Cline v. Berg with Ms. Hentschel’s dinosaur display. Kids love walking past dinosaurs and taking selfies in front of them. They distinguish Hentschel’s property. In the Cline case, the tripod and fence served no beneficial purpose outside of the neighbor conflict. In one case, there is fun and an increased sense of community, and in the other a scorched earth war. They are two ways to blowing off steam, with different effects on the community.

Property owners finding themselves in a dispute with a neighbor or community association, where rational discourse isn’t working may struggle with what to do next. Do I continue to suffer the indignity without complaint? Lash out by erecting a fence or other structure that serves no positive value? Bring a lawsuit? In a continuing education course I once attended, an experienced attorney explained that when these kinds of disputes arise, he asks the client if they have considered erecting a reasonable fence along the boundary of the property, as shown by the surveyor. Fences and walls define relationship boundaries in a physical way. When someone erects a fence, if their neighbor doesn’t like it, the burden is on them to bring suit requesting that the fence come down. Ms. Hentschel’s dinosaurs illustrate yet another alternative. I don’t know whether the dinosaurs violate her HOA covenants or not. If she broke the rules, at least she did it with something of popular value. In Virginia and other states, courts construe HOA covenants according to contract law. Where little damages are provable, potential court remedies may be limited. The outcome of particular cases will vary according to the facts and circumstances. If your neighbor or community association are interfering with your rights to use your own property, don’t give them the pleasure of responding to the provocation with an attack, escalating the conflict in a risky way. Contact qualified legal counsel to explore alternatives to protecting your rights. In many cases, review of a land records search and updated boundary survey may reveal overlooked possibilities for a favorable solution.