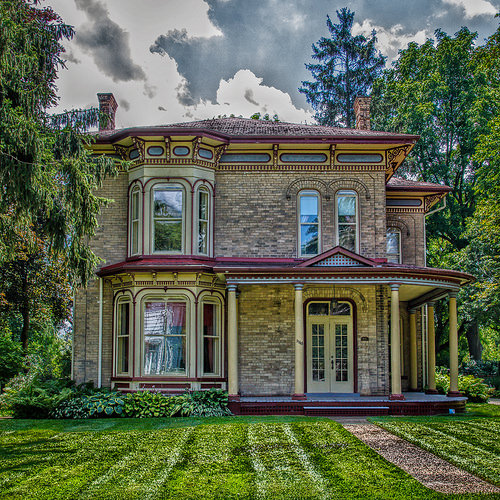 September is when students go back to school. My daughter recently started at a new daycare. I feel like I have gone back to school too. Her school’s daily procedures are as new to me as they are to my daughter. One back-to-school activity is “Show and Tell.” Show and Tell is a great introductory public speaking educational activity for kids. The student might bring in something they acquired over their summer vacation. Her turn comes, she stands before the class, shows the item and explains its story. My daughter is not old enough for Show and Tell yet. At her age, the other kids want to grab any interesting new item that a classmate brings. I’ve learned not to let her bring her own toys to school because of the tendency for items to be disputed, damaged or lost. Home toys stay at home, daycare toys stay at school. Peace on earth.

When we become adults, our property we tell friends about has more complex stories than finding a horseshoe crab shell on the beach. I work with property owners who find themselves in various disputes over land, homes or major renovations. With a child, possession of a toy is often enough to justify shouts of “mine, mine, mine” to a classmate who wants it. With property, there is a maze of land records, contracts, statutes, rules, etc. that affect the respective rights of the parties. Adults see analytical thinking as important to deciding property and contract disputes. However, there is a deep emotional connection between owners and their property rights. At stake is one’s livelihood, sense of home, financial future, interpersonal relationships and a host of other matters that touch upon someone’s identity. All professionals who have experience in the residential property sector learn to accept the very real emotional dimension to all of this.  Disputes in residential construction and property matters are emotional for the participants.

When anyone feels that their property rights are under attack, or they are accused of attacking someone else’s property rights discussions quickly acquire a moral quality. Right versus wrong. Us versus Them. When property owners reach a certain point in disputes with mortgage companies, buyers, sellers, tenants, contractors, HOAs or neighbors it often seems like their requests or explanations are not being heard. Angry people tend to “tell” things and struggle to also “show” key points. I frequently see how escalating stress in property disputes leads otherwise smart, good people to “over-moralize” their perception of a dispute and possibly miss opportunities to resolve it without any more delays, headaches and expenses than are necessary. I will describe how a “show AND tell” approach can be a powerful tool to getting things going in the right direction.

First, I would like to provide a hypothetical so that you can understand what I am talking about. Ted and Julianna hired Claude to build an addition on their house. They signed a contract. Claude started working on the project. Claude repeatedly requested that Ted and Julianna provide advance payments so that he would have funds to proceed. Wanting him to get done quickly, they did. Things progressed to the point that Claude got paid 90% on the job at a time when he was only 70% done on the project. Claude became less interested in the work once he got paid almost everything he was supposed to be paid. Ted and Julianna had a list of items that were not correctly built or not finished. One of the items was a leak into their house. They believed flashing around a window was not properly installed. Ted and Julianna grew weary of sending Claude multiple voicemails and emails about this and other defects. Claude sent someone to repair it. This required Ted and Julianna to cancel their annual garden party to accommodate the worker’s schedule. The “repairs” did not stop the leak. Realizing that they  paid more than they received and were being given the runaround, Ted decided to fully document everything. Ted and Julianna had good reason to be upset at what Claude did.  Ted took a video of the water coming into his house on his smartphone during a rainstorm and spoke during the video, adding a few choice words for Claude and his crew. One text message later, Claude received the video. All Claude could see was a close up of drops of water around what seemed to be the corner of the window of the interior of a house. He heard Ted’s upset voice. Claude forwarded the video to his lawyer Sean. Claude and Sean could tell that Ted was not happy. They did not know what to make of the video because it was unclear what house it was in, which window it was, what date it had been made. It was just a close up of a leak. Claude and Sean decided to just lie low and see what Ted and Julianna did next. Ted and Julianna became even more upset because their proof of the defect had been ignored by the contractor. They went online and noticed that a subcontractor filed a small claims case against Claude on another case. Several years ago someone left a zero star review about Claude on a website. They began to think about what they could do to force Claude to do something or at least get his attention. During a subsequent telephone call between Julianna and Claude, the discussion escalated further.

As you can see, Ted and Julianna have legitimate grievances about Claude’s work. They know that they need to do something. They decide that Claude isn’t hearing them, so they decide to tell Claude what is happening a little louder with the video with the angry voiceover. However, this does not “show” what is happening. The video is a closeup which lacks adequate context for someone unconnected to the dispute, like a judge, arbitrator or professional to understand the meaning of what they are being “told.” Claude and Sean decided to wait and see what Ted and Julianna do because so far they have not shown that they know how to explain their case. What often happens in these situations is the consumer who feels they are being ignored does not try to “show and tell” but merely to “tell” louder and louder.

When real estate and construction disputes escalate, eventually they are heard by regulatory officials, judges, arbitrators or juries. These “neutrals” are the audience for numerous complaints. If the complaining party is over-moralizing the dispute and only “telling” the story of how their opponent is a bad person instead of also “showing” through an accurate and engaging narrative, the neutrals are likely to side with the defendant. All the neutral knows is that an angry person is pointing fingers and is not prepared to explain how rules, contract documents and/or evidence support their claims. The aggrieved party does not understand why others cannot see what they know and feel. Disputes that escalate like this can become difficult to settle because of the attenuation of the circumstances and the “right and wrong” focus of the parties. If the opposing party feels that they cannot negotiate with the consumer they may be inclined to simply fight fire with fire. Sometimes angry people have a difficult time even coming up with a demand letter because the truth is something they live with every day. Explaining and proffering evidence seems unnecessary. But that is what is needed.

What is the answer to avoiding or resolving these kinds of disputes? I have a few ideas:

Succumbing to the temptation of “over-moralizing” is dangerous is because the victim becomes susceptible to further manipulation. The consumer might do or say something that might prejudice their case. They might fall victim to further fraud by accepting the assurances of their opponent and then letting down their guard and missing some sort of deadline such as filing a lawsuit or warranty claim.

I am not saying that the difference between right and wrong is unimportant. It is very important. Also, I don’t like it when people call for someone to “strip your emotion out of this.” That’s not possible. The key is to bring the right “pitch” to one’s emotional response to a situation. Not too high and not too low. If one’s voice is on pitch, then the decision-makers will be able to hear it. If the advisors and allies of one’s opponent can see that the consumer is disciplined in their approach to defending their rights and is prepared to both “show and tell” then the necessary steps have been taken to settle the dispute or achieve the best result in court or arbitration.