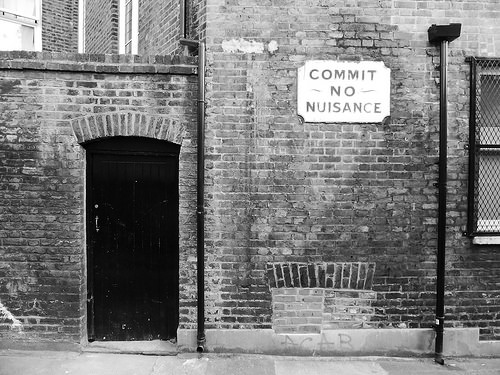 Supreme Court Justice Anthony Kennedy recently wrote in an opinion that, “Property rights are necessary to preserve freedom, for property ownership empowers persons to shape and to plan their own destiny in a world where governments are always eager to do so for them.” Murr v. Wisconsin, 198 L.Ed.2d 497, 509 (U.S. Jun. 23, 2017). This principle goes beyond the eminent domain issues in Murr v. Wisconsin. Many HOAs and condominiums boards or property managers are eager to make decisions for (or ignore their duties to) owners. In the old days, legal enforcement of restrictive covenants was troublesome and uncertain. In recent decades, state legislatures made new rules favoring restrictive covenants. Sometimes owners seek to do something with their property that violates an unambiguous, recorded covenant. I don’t see that scenario as the main problem. What I dislike more is community associations breaching their specific obligations to owners, as enshrined in governing documents or state law. Is the ability to enforce the covenants or law mutual? Are legal remedies of owners and HOAs equitable?

Why HOAs Wanted the Power to Fine:

Take an example. Imagine a property owner decides that it would be easier to simply dump their garbage in the backyard next to a HOA common area than take it to the landfill. Let’s assume that does not violate a local ordinance. Or substitute any other example where a property owner damages the property rights of others and the problem cannot be solved by a single award of damages. Before legislatures adopted certain statutes, the association would have to bring a lawsuit against the owner, asking the court to grant an injunction against the improper garbage dumping. This requires a demand letter and a lawsuit asking for the injunction. The association would have to serve the owner with the lawsuit. The owner would have an opportunity to respond to the lawsuit and the motion for the injunction. An injunction is a special court remedy that requires special circumstances not available in many cases. The party seeking it must show that they cannot be made whole only by an award of damages. The plaintiff must show that the injunction is necessary and would be effective to solve the problem. The legal standard for an injunction is higher than that for money damages, but it is not unachievably high. Courts grant injunctions all the time. However, the injunction requires the suit to be filed and responded to and the motion must be set for a hearing. Sometimes judges require the plaintiff to file a bond. Injunction cases are quite fact specific. The party filing the lawsuit must decide whether to wait for trial to ask for the injunction (which could be up to one year later) or to seek a “preliminary” or “temporary” injunction immediately. If the judge grants the injunction against the “private landfill,” the defendant may try to appeal to the state supreme court during these pretrial proceedings. These procedures exist because property right protections run both ways. Those seeking to enjoin the improper dumping have a right, if not a duty, to promote health and sanitation. Conversely, the owner would have a due process right to avoid having judges decide where she puts her trash on her own property. If the court grants the injunction, the judge does not personally supervise the cleanup of the dumping himself. If an order is disobeyed, the prevailing party may ask for per diem monetary sanctions pending compliance. That money judgment can attach as a lien or be used for garnishments. These common law rules have the effect of deterring the wrongful behavior. This also deters such lawsuits or motions absent exigent circumstances. Owners best interests are served by both neighbors properly maintaining their own property and not sweating the small stuff.

Giving Due Process of Court Proceedings vs. Sitting as both Prosecutor and Judge:

If association boards had to seek injunctions every time they thought an owner violated a community rule, then the HOAs would be much less likely to enforce the rules. The ease and certainty of enforcement greatly defines the value of the right. Boards and committees do not have the inherent right to sit as judges in their own cases and award themselves money if they determine that an owner violated something. That is a “judicial” power. Some interested people lobbied state capitals for HOAs to have power to issue fines for the violation of their own rules. To really give this some teeth, they also got state legislatures to give them the power to record liens and even foreclose on properties to enforce these fines.

Statutory Freeways Bypass the Country Roads of the Common Law:

Let’s pause for a second and pay attention to what these fine, lien & foreclosure statutes accomplish. The board can skip over this process of litigating up to a year or more over the alleged breach of the covenants or rules. Instead, the board can hold its own hearings and skip ahead to assessing per diem charges for the improper garbage dumping or whatever other alleged infraction. Instead of bearing the burden to plead, prove and persevere, they can fast track to the equivalent of the sanctions portion of an injunction case. Instead of enjoying her common law judicial protections, the owner must plead, file and prove her own lawsuit challenging the board’s use of these statutory remedies. Do you see how this shifts the burden? Of course, the HOA’s rule must meet the criteria of being valid and enforceable. In Virginia, the right to fine must be in the covenants. The statute must be strictly complied with. But the burden falls on the owner to show that the fast track has not been complied with.

Statehouse lobbying and clever legal writing of new covenants has helped the boards and their retinue. Let’s take a moment to see what remedies the owner has. Imagine reversed roles. The board decided that they could save a lot of money if they dumped garbage from the pool house onto the common area next to an owner’s property. The board ignores the owners’ request to clean and maintain that part of the common area. Let’s assume that the governing documents require the board to maintain the common area and do not indemnify them against this kind of wrongful action. The owner can sue for money damages. If the case allows, the owner may pursue an injunction against the board to clean up the land and stop dumping trash. The owner must follow the detail-oriented procedures for seeking an injunction. The owner does not have a fast-track remedy to obtain a lien against any property or bank accounts held by the board.

Fine Statutes Should be Legislatively Repealed:

In my opinion, community association boards and owners should both be subject to the same requirements to enforce restrictive covenants. If state legislatures repealed their fine and foreclosure statutes, the boards would not be left without a remedy. They would not go bankrupt. Chaos would not emerge. They would simply have to get in line at the courthouse and play by the same rules as other property owners seeking to protect their rights under the covenants or common law.

“But Community Association Lawsuits are a Disaster:”

Many of my readers are skeptical of leaving the protection of property rights to the courts. They don’t like people who sue or get sued. They argue that whether you are defending or suing, the process is laborious and expensive. The outcome is not certain. I don’t agree that property owners should surrender their rights to associations or industry-influenced state officials. What if there was a controversy-deciding branch of government that the constitution separates from special-interest influence and the political winds of change? Wouldn’t that be worth supporting? I know that there are legal procedures that drive up the time and expense of the process without adding significant due process value. That does not mean that the courts should be divested of the power to conduct independent review and award remedies not available anywhere else.

Judicial Remedies Are Better Options Than Many Owners Think:

Fortunately, owners have many rights that their boards and managers are not informing them about. Many common law protections have not been overruled. In Virginia, restrictive covenants are disfavored. Any enforcement must have a firm footing in the governing documents, statutes and case law. The statutes adopted by the legislature limiting the common law protections are strictly (narrowly) interpreted by the courts. It is not necessary, and may be counterproductive to run to some elected or appointed bureaucratic official. Under our constitutional structure, the courts have the power to enforce property rights. Many owners cannot wait for the possibility that a future legislative session might repeal the fine statutes. If they are experiencing immediate problems (like improper dumping of garbage or whatever) they need help now. In rare cases law enforcement may be able to help. In most cases working with a qualified attorney to petition the local court for relief is the answer.