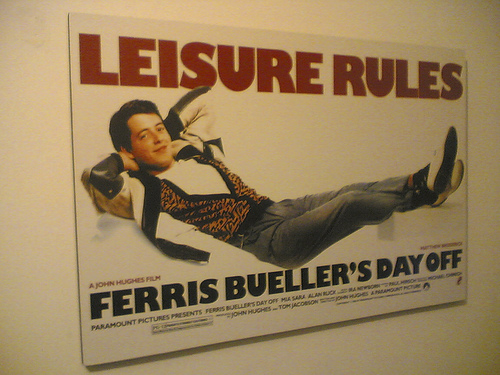 In the classic comedy, Ferris Bueller’s Day Off, Ferris’s mother meets with the assistant principal to discuss his absenteeism. She had no idea he took 9 sick days. The school official bluntly explains: “That’s probably because he wasn’t sick. He was skipping school. Wake up and smell the coffee, Mrs. Bueller. It’s a fool’s paradise. He is just leading you down the primrose path.” Mothers of truant teenage sons aren’t the only ones succumbing to the temptation of wanting to believe that everything is fine when it isn’t. Owners busy with their jobs and families would like for their home to be worry-free. Unfortunately, the Ferris Bueller’s of the world sometimes grow up to service mortgages, manage HOA’s and handle customer service for home builders. The real estate and construction industry has some predators who lead consumers on the “primrose path.” We are not talking here about mere “sales talk” and “puffery” (for example, someone merely says that they will “treat you like family”). Promissory Fraud is when someone makes promises with no intent to follow-through but with every desire for the listener to rely upon it. In the past few years, borrowers have sued mortgage servicers for false promises of loan modifications in fraudulent foreclosure cases. Loan servicers stand in the shoes of the original mortgage lender as far as the borrower is concerned. Servicers send out the loan account statements, collect the payments and make disbursements. These cases allege that the servicers used “primrose path” tactics to conduct foreclosure fraud.

Leading along the primrose path is a powerful ploy because of the psychological roller-coaster the consumer experiences. Financial struggles, default notices and foreclosure letters causes stress and troubles that impact owners’ resources, time and relationships. Promises of time extensions, foreclosure avoidance and loan modifications are spellbinding. They invite the consumer to the much-missed happy place of living their life without threat of catastrophic financial loss. If the servicer says just the right thing, the borrower will very naturally want to let down their guard and forego more arduous tasks of forging a legal and financial solution to the problems. The false sense of security is intoxicating. When the borrower later experiences foreclosure instead of the promised modification, they are left trying to pick up the pieces.

Mortgage servicers often get away with this because borrowers don’t always pay close attention to what they are actually being told. When borrower listen and take notes, they protect themselves. In 2014, a federal judge in Norfolk considered a claim for fraud based on telephone misrepresentations that Wells Fargo Bank allegedly made in the foreclosure context. When Virginia Breach homeowner Veola Morrison died in 2009. Her family received a notice that the property would be foreclosed on January 19, 2011. Veola’s son Randolph offered to assume the mortgage and requested an interest rate reduction. On January 12, 2011, a Wells Fargo employee told Randolph that he was approved for a loan modification and that the January 19, 2011 foreclosure would not take place. Wells Fargo sent Randolph a letter dated January 14, 2011 offering him a special forbearance agreement, requiring him to make his first payment on February 1, 2011. A “forbearance” is when the lender agrees to hold off on foreclosure and collection activities for a period of time in anticipation that the borrower will resolve short-term cash flow difficulties. They said that the foreclosure would be suspended so long as Randolph kept to the terms of the agreement. In spite of these representations, Wells Fargo Bank’s substitute trustee conducted the foreclosure sale anyway on January 19, 2011. In his suit, Randolph alleged that he reasonably relied upon a telephone statement by Wells Fargo that the January 19, 2011 foreclosure would not occur. He relied upon the subsequent letter saying when he had to make his next monthly payment. Relying on these representations, Randolph did not take other actions to prevent foreclosure such as hiring an attorney. After he discovered what happened, Randolph sued Wells Fargo. The Court denied Wells Fargo’s initial motion to dismiss the case and allowed Randolph’s claim for promissory fraud to proceed in Court. The case settled before trial.

Just because a false reassurance is not in writing doesn’t mean that the borrower can’t sue for fraud.  Virginia Federal Judge Glen Conrad considered this question in 2014. Jackie & Alan Cook owned a property in Lovington, Virginia. In September 2011, Mr. Cook explained to his lender CitiFinancial, Inc. that he was current on his loan but struggling to make payments. The branch manager suggested that he pursue a loan modification through the Home Affordable Modification Program (“HAMP”). The manager told Mr. Cook that if he stopped paying, the lender would “have to modify the loan” and it would probably be able to cut the interest rate and principal owed. Mr. Cook became leery and asked questions. The manager reiterated that he should just stop making payments and ignore the bank’s letters until he received a notice with a date for the foreclosure sale. The customer services rep told Mr. Cook that once he got the foreclosure notice he could call the number on it and get started. Per the manager’s instructions, Mr. Cook stopped making payments and ignored the servicer’s default letters.

On June 17, 2013, Cook received a notice that on July 17, 2013, foreclosure trustee Atlantic Law Group would sell his Nelson County property in foreclosure. Remembering what CitiFinancial originally said, Cook tried to call the loan servicer 20 times, receiving no answer or he was hung up on. Finally, on July 11, 2013, Mr. Cook got ahold of CitiFinancial who told him what information they needed for a loan modification. When Mr. Cook talked to another employee of the servicer, he was told that his case would remain on “pending/hold status” for 30 days in order for him to obtain the necessary documents, and that the scheduled foreclosure would be postponed during that time. On July 17, 2013, the noticed day of foreclosure, one employee of the servicer told him on the telephone the “great news” that he was awarded a loan modification. Later that day, he talked to another employee of the servicer who told him that the foreclosure would indeed proceed as originally scheduled, because he failed to provide them with necessary documents. When Mr. Cook asked her about the 30-day hold period that he was previously given, she replied that “she had never heard of such a thing” and that there was nothing to be done to stop the foreclosure sale. Notice how the servicer used a new misrepresentation about the 30-day period to keep Mr. Cook on the “primrose path” even after he struggled to communicate with him after defaulting per their instruction. Mr. Cook rushed to an attorney’s office but by the time the trustee received the attorney’s letter the sale had already occurred. Use of the primrose path strategy is particularly damaging because the new buyer can use the foreclosure trustee’s deed to initiate eviction proceedings. Citi bought this property at the trustee’s sale and brought eviction proceedings against Mr. Cook. Cook filed suit, basing fraud claims on the servicer’s false promises. CitiFinancial initially moved for the court to dismiss the lawsuit, arguing that Cook could not have reasonably relied upon the false oral representations because the promissory note and deed of trust provided unambiguous terms for foreclosure in the event of default. Citi seemed to be saying that only things that are in writing are official in the mortgage context. Judge Glen Conrad rejected this argument because the question of whether Cook was justified to rely upon Citi’s oral statements was an evaluation of the credibility of witnesses at trial.

Jackie & Alan Cook’s case settled before trial. An agreed order reversed the foreclosure sale. While a servicer misrepresentation doesn’t have to be in writing to constitute fraud, the dispute may come down to a “he-said she-said” at trial. Few borrowers will take careful notes at the time these discussions take place. While defendants may be required to make document disclosures, homeowners can’t count on getting copies of servicer notes and internal messages during the litigation. Search warrants are not available in civil cases.

The experiences of the Morrisons and Cooks are common amongst different lenders all across the country. It’s best for homeowners struggling with their mortgages avoid the “primrose path” promises made by some servicers, foreclosure trustees and foreclosure rescue scams. If it sounds too good to be true, then it deserves thorough review and consideration.  However, there are many situations where relying upon the representations of a lender or trustee is the only reasonable option. Once the foreclosure trustee’s deed is recorded, the borrower may face eviction proceedings. If a trustee or servicer breaches the mortgage documents or makes misrepresentations in conducting a foreclosure, the borrower should contact qualified legal counsel immediately.