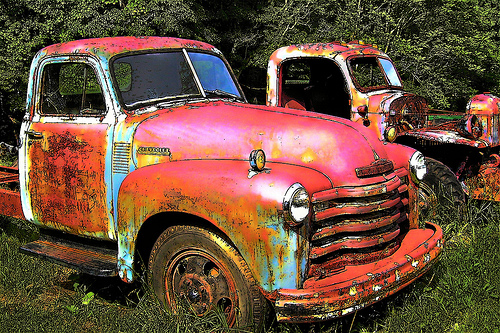 I grew up in a rural county in Virginia. Seeing broken-down cars parked in front of a house was part of the landscape. The perfect backdrop for the Blue Collar Comedy Tour. If you are waiting to get the money to fix it, where else would you store a car that doesn’t work?

In college, a friend of mine lent me his car. A tire went flat in a church parking lot. The church got tired of having a broken down car out front, week after week. The priest and I tried to change the tire. No matter how hard we pried, we just couldn’t get the wheel off. Later I learned from the owner that the wheels were welded on! I then felt like less of a wimp.

A car can be the apple of the owner’s eye. But when vehicles break down, they become an eyesore to the community. Many local governments have zoning ordinances against storing multiple inoperable vehicles outside homes without a covering screen or wall. Harrisonburg, Virginia, a college town in the Shenandoah Valley, has one of these ordinances.

The City of Harrisonburg convicted Terry Wayne Turner of violating a zoning ordinance by storing four inoperable vehicles on property owned by his mother. Terry owned the four vehicles. Although he lived with his mother, he did not own or lease her property. Harrisonburg cited him with a zoning violation for storing the four inoperable vehicles. Terry Wayne Turner v. City of Harrisonburg, No. 1197-12-3 (Va. Ct. App. Oct. 8, 2013)

At trial in the Circuit Court of Rockingham County, Terry argued that he was not liable under the zoning ordinances because he did not have title or lease to the property where he stored the cars. He argued that he was not a proper defendant in a land use case because the regulations apply to real property and their owners, not personal property like automobiles. The Court convicted Turner of a misdemeanor, ordered him to remove the vehicles and sentencing him to jail time and probation.

Mr. Turner appealed this conviction to the Court of Appeals of Virginia. He conceded that the storage of the vehicles rendered the property non-compliant with the land use restrictions. Turner focused on the fact that he was an invitee, and not an owner or tenant of his mother’s home. He argued that the scope of the zoning ordinances cannot extend to the ownership of personal property like automobiles. The Court of Appeals noted that zoning laws regulate the use and occupancy of land, not merely its lease or ownership. The ordinances do not contain specific limitations to owners or lessees of real estate. “Any person…found in violation of this chapter… shall be guilty of a class 1 misdemeanor.” The Court observed that if someone conducts a zoning violation on the property of another, that could thwart the purposes of land use restrictions.

On appeal, Mr. Turner brought up a new argument that his mother, not him, is the proper defendant in this case. She was the one who properly held a duty to make the property conform to the zoning regulations. The Court refused to consider this argument because Turner did not preserve it for appeal by presenting it to the trial judge. It is difficult from the text of the opinion to determine what role, if any, his mother played in this dispute. The Court may have found a belated attempt to shift the blame onto a family member unsavory.

Turner provides some food for thought:

photo credit: lewsviews via photopin cc (Does not depict Mr. Turner’s vehicle – apparently this photo was taken in Rappahannock County)

They Might Be Mortgage Giants: Fannie & Freddie's Tax Breaks