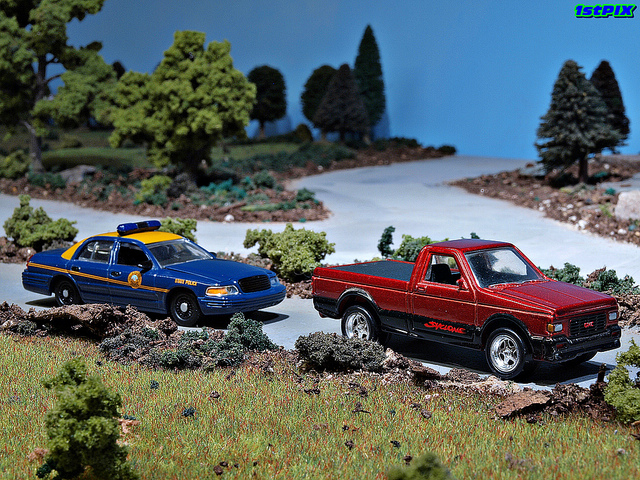 The classic image of a homeowners association is a neighborhood with stately homes or attractive townhouses. Owners occupy their own properties. Neighbors socialize with one another, perhaps around a park, golf course, tennis court or swimming pool. The common areas make the development an attractive place to live. Common values of commitment and neighborly respect inform stewardship of common areas and management of the association’s business. Desire to achieve this ideal motivates many land development and home buying decisions. According to Virginia Lawyers Weekly, there are 5,645 registered community associations in Virginia, and several thousand more unregistered ones. That’s a lot of roads and other common areas that are neither individually owned nor maintained by local governments. If someone recklessly drives their car on those association-owned roads, who has the authority to pull them over?

On August 13, 2014, Mark R. Herring, Attorney General of Virginia released an official advisory opinion addressing the question of homeowner associations and traffic stops. State Senator Bryce Reeves asked Mr. Herring whether a HOA may enforce violations of state or local traffic laws on its private streets and whether and how a HOA may adopt and enforce its own rules regulating traffic (Sen. Reeves’ district includes Fredericksburg, Orange County, and some surrounding areas). The Attorney General’s opinion is about the intersection between HOA law and traffic law. Mr. Herring outlines two options for associations: (1) ask the city or county in which their community is located to police the streets, or (2) they may use private security qualified as Special Conservators of the Peace.

Why is this issue coming up in 2014? The economic collapse beginning in 2008 affected homeowners associations in several ways:

What better words to describe such a dystopia than lyrics from one of the worst pop songs of the 1980’s:

Say you don’t know me or recognize my face
Say you don’t care who goes to that kind of place
Knee deep in the hoopla, sinking in your fight
Too many runaways eating up the night.

Developers sought to create oases where children could safely play and parents could develop long relationships with neighbors. Now in some HOA’s, security patrols are chasing residents, tenants and guests for traffic violations.

The Attorney General Opinion describes an unnamed association (within Sen. Reeves’ district) that directed its safety patrol to stop moving vehicles and issue citations for traffic infractions such as speeding, reckless driving and failure to obey highway signs. The safety patrol even uses vehicles with flashing lights to pull over drivers over. Through the safety patrol, the association holds property owners responsible for their infractions and those of their guests. This association has its own “court” in the form of a Violations Review Panel where homeowners may appear to contest citations.

Do associations have the authority to enforce traffic rules in this way? How much do HOA’s resemble local governments? In commenting on this opinion, community associations lawyer Lucia Anna “Pia” Trigiani of Alexandria told Virginia Lawyers Weekly that, “community associations exist in some respects to relieve demands for local government services such as traffic enforcement and road maintenance.” No doubt these developments ease cities and counties burdens to provide key infrastructure in many residential neighborhoods. Attorney General Herring’s opinion appears to disagree with Ms. Trigiani in a critical aspect. He observes that the Virginia Property Owners Association Act does not grant associations the authority to enforce violations of state or local traffic laws that occur on community property. Private persons may only enforce traffic laws if they have been appointed as a Special Conservator of the Peace (“SCOP”). To qualify as an SCOP, one must undergo substantial training. Otherwise, attempts to pull over or stop drivers could be deemed an “unlawful detention” by misrepresentation of authority to conduct police-like activities. Associations may ask the city or county in which their community is located to police the streets, or they may use private security qualified as SCOP’s. Virginia Lawyers Weekly‘s Peter Veith notes that extensive use of SCOPs may produce its own controversies, since the extent of an SCOP’s authority may be misunderstood by the security guard or the drivers on association roads. If someone produces a SCOP credential, what does that mean to an individual driver?

Attorney General Herring makes an important point about the statutory authority of HOA’s to enforce their rules and regulations over their common areas. “Rules and regulations may be enforced by any method normally available to the owner of private property in Virginia.” Real estate legal remedies are not tailored to enforcing traffic laws. Private property owners do not have the authority to conduct arrests or stops of vehicles for violation of traffic rules. That authority is reserved to law enforcement and SCOP’s. This limitation may also apply to other quasi-governmental activities undertaken by HOA’s.

In the Lake of the Woods Association in Orange County, the reaction to this Attorney General Opinion was swift. The Free Lance-Star reports that this large community went to the County Board of Supervisors which adopted an ordinance designating the LOWA roads as highways for law enforcement purposes. This will allow LOWA SCOPs to issue traffic citations and broaden the authority of local law enforcement in the community. I expect that similar decisions will be made in HOA’s around the state that have extensive systems of community roads.

If you or your Association seek to navigate safely through the regulatory landscape now coming into focus regarding the enforcement of traffic laws in community associations, contact qualified attorneys having experience in both real estate and traffic law matters to review your association’s legal instruments. Communities with extensive networks of roads should take precautions to get ahead of avoidable situations where HOA roads become hazardous or private security unlawfully detains drivers.

photo credit: Phil’s 1stPix via photopin cc (apparently one of the toy cars is a W. Va. police vehicle)

Real Estate Decisionmaking in the Face of the Unknown