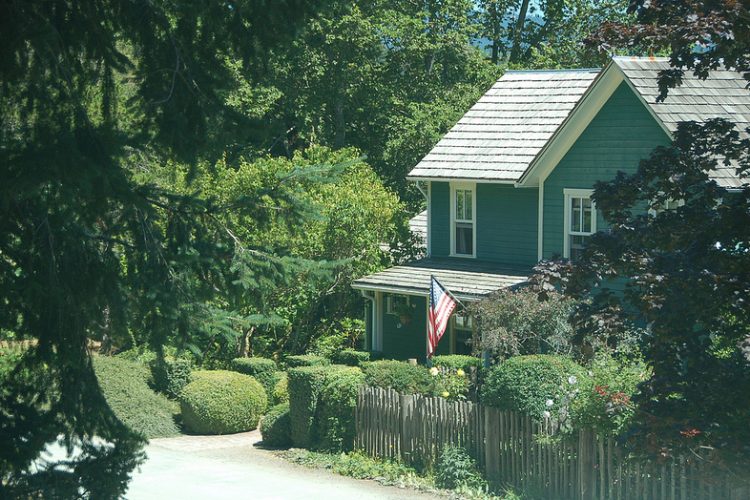 Today, on Veterans Day, I would like to honor veterans who have served our country. Many of them return to civilian life and make additional, substantial contributions to their communities. A few go on to struggle to protect the property rights of themselves and others. In some cases, HOA’s may even attempt to foreclose on home of a veteran for flying the flag of the United States.

Larry Murphree is a U.S. military veteran who owns a residential unit in the Tides Condominium at Sweetwater in Florida. In 2011, he began to display a small 11″ x 17″ flag in a flower-pot outside his front door. His Association asserted fines against Mr. Murphree and the parties found themselves in litigation. The parties reached a settlement wherein Murphree agreed to display the flag in accordance with the condominium instruments. I first heard Mr. Murphree’s story on an October 18, 2014 interview by Shu Bartholomew on her radio show and podcast, “On the Commons.”

After the settlement, the Association adopted new guidelines which permitted display of one american flag, but only in a bracket near the street number plate. The new rules prohibited owners from displaying the flag during bad weather or at night. The military and other U.S. government facilities have more rigorous etiquette for display of the American flag than what is required of private citizens. The new rules the Tides Condominium may have been an attempt to shame Mr. Murphree for not following the military flag etiquette, which a private citizen is not ordinarily required to observe.

The Association also adopted new rules for potted plants. The Association only allowed one pot, which may only contain plants and a maximum of three self-watering devices. This Association found it is necessary to regulate what items may be placed in flower-pots on the doorstep of unit owners. Undoubtedly, there are cases where neighbors erect obstructions which infringe upon the rights of their neighbors. However, Mr. Murphree’s flag does not appear to be an albatross. At Mr. Murphree’s website, http://letmeflytheflag.com, you can see the small flag display from the street view.

Mr. Murphree decided to continue to display the American flag in the flower-pot. The Association began to assess fines a $100.00 per day. They now want to foreclose on his property for the unpaid fines. The parties are in litigation again. On March 32, 2014, the U.S. District Court for the Middle District of Florida published an opinion deciding, among other things, that the First Amendment protections do not apply against non-governmental entities like a homeowner’s association. The Court also ruled that the Freedom to Display the American Flag Act of 2005 does not provide for a right to sue a property association. It is my understanding that the litigation currently continues in Florida state court.

In 2009, retired army veteran Colonel Van Thomas Barfoot’s association ordered him to remove a 21-foot flagpole that he used to fly the American flag. Mr. Barfoot earned the Medal of Honor and served in World War II, Korea and Vietnam. Barfoot won his dispute, but not without help from two senators and a former governor. Ted Strong discusses Mr. Barfoot’s story in a November 2, 2014 article in the Richmond Times-Dispatch.

In Virginia, both the Property Owners Association Act and the Condominium Act contain provisions relating to the federal Freedom to Display the American Flag Act of 2005. These state laws disallow associations from prohibiting owners, “from displaying upon property to which the unit owner has a separate ownership interest or a right to exclusive possession or us of the flag of the United States” where such display complies with federal law. However, the statutes do allow the association to:

establish reasonable restrictions as to the size, place, duration, and manner or placement or display of the flag on such property provided such restrictions are necessary to protect a substantial interest of the association.

In condominiums, balconies, patios and doorways are usually what’s called “limited common elements.” This would limit the usefulness of these legal protections to a homeowner desiring to display the flag in such areas.The statute does not define what “substantial interests” an association may have that would need to be protected from display of the American flag. The provisions state that the association bears the burden of proving the legitimacy of the restrictions. It is remarkable that the same government that authorize a HOA’s exercise of power would allow them to restrict or forbid a citizen’s right to display that government’s flag. The Richmond Times-Dispatch article does not discuss what federal or state statutes played a role in the outcome of Mr. Barfoot’s case.

Associations become more prevalent each year. Kirk Turner, Director of Planning of Chesterfield County told Mr. Strong that around 100% of new developments of at least 20 lots have mandatory associations: “From our standpoint, we actually encourage the creation of an HOA.”  Henrico County Attorney Joseph Rapisarda explained: “To me, the HOA is like a mini-government.” If a HOA is indeed a “mini-government,” then a homeowner might expect constitutional protections normally provided against governmental intrusion. From the owner’s perspective, if the HOA has the authority of a mini-government but not the legal restrictions, that makes homes subject to association covenants less valuable. In her interview of Mr. Murphree, Ms. Bartholomew observed that  to the owner, the value of property is what the owner does with the property, not what it would sell for. I can see how difficult it might be for a comparable sales analysis to account for the exercise of association powers.

If your association is taking action against you for display of the American flag or any other political or religious symbols, contact a qualified attorney.

photo credit (photo does not display any of the properties discussed in this post): PatrickMcNally via photopin cc