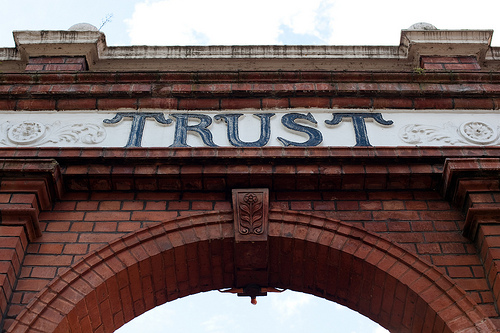 In Virginia, unlike some other states, a foreclosure is a transaction and not necessarily a court proceeding. A trustee appointed by the lender auctions the property. The proceeds of the sale must be applied to reduce the outstanding loan amount and transaction costs. A Trustee has special duties to the parties as their “fiduciary.” What are the fiduciary duties of foreclosure trustees?

At real estate closings, settlement attorneys present borrowers with a document entitled “Deed of Trust.” In this document, the borrower pledges the purchased property as collateral. The Deed of Trust provides the legal framework for the lender to pursue foreclosure in a default. It also procedurally protects the borrower’s property rights. When the lender records the Deed of Trust in the land records, a lien encumbers the property until the debt is released. The Deed of Trusts names one or more persons as Trustees for the property. It describes the borrower as the creator of the trust and the bank as the beneficiary. If the borrowers avoid falling into persistent default of their loan obligations, this trust language is largely irrelevant.

If the borrower experiences economic hardship and falls behind on their payments, however, they will begin to receive notices referencing the Deed of Trust. The bank may appoint a Substitute Trustee to handle the foreclosure. The culmination of the foreclosure process is the Foreclosure Trustee’s public auction of the property to satisfy the distressed loan. What does the foreclosure process have to do with trusts and trustees? Generally, under Virginia law, a breach of a trustee’s duties gives rise to a Breach of Fiduciary Duty legal claim. Lawyers like to pursue these claims because they may impose duties and remedies not articulated in the contract. Does this trust relationship give the homeowner greater or fewer protections against breaches by the bank’s agents during the process?

On May 16, 2014, I posted an article about the materiality of technical errors committed by the mortgage investors in the foreclosure process. That post focused on two new April 2014 court opinions providing some guidance on what remedies borrowers may have for those errors. Those new court opinions also provide fresh guidance about fiduciary duties of foreclosure trustees. Today’s blog post is about dealing with trust issues in foreclosure.

The Deed of Trust on Bonnie Mayo’s Williamsburg home listed Wells Fargo Bank as the “beneficiary” and the foreclosure law firm Samuel I. White, PC, as the Trustee. Mayo’s post-foreclosure sale lawsuit alleged that the White Firm breached its fiduciary duties to the borrower. For example, Mayo’s Deed of Trust required the lender to state in written default notices that she may sue to assert her defenses to foreclosure. The lender’s notices did not advise her of this, and she did not sue until after the foreclosure occurred. The Federal Judge considering her claims noted that there is conflicting legal authority on the extent to which a foreclosure Trustee can be sued for Breach of Fiduciary Duty. In his April 11, 2014 opinion, Judge Jackson observed that under Virginia law, a Foreclosure Trustee is a fiduciary for both the borrowing homeowner and the mortgage investor. While courts impose those duties on Foreclosure Trustees set forth in the Deed of Trust, they are reluctant to impose all general trust law principles.

Judge Jackson concluded that in addition to those duties set forth or incorporated into the Deed of Trust, the only other imposed on Trustees is the duty of impartiality. For example a foreclosure sale must be set aside where a trustee failed to refrain from placing himself in a position where his personal interests conflicted with the interests of the borrower and the lender. For example, the Trustee may not purchase the auctioned property himself or assist the bank in setting its bid. The Federal Judge dismissed Ms. Mayo’s Breach of Fiduciary Duty claims against the White Law firm, since impartiality was not adequately pled in the lawsuit.

In an April 17, 2014 opinion, the Supreme Court of Virginia focused on the limited nature of a Foreclosure Trustee’s powers. In this case, the Deed of Trust required the lender to try to conduct a face-to-face meeting with the borrower between the default and the foreclosure. The lender’s Trustee foreclosed, even though the lender did not make such an effort. The Court observed that the trustee’s authority to foreclose is set forth in the Deed of Trust. The Trustee’s power to conduct the sale does not accrue until the specified conditions are met. The borrowers’ failure to make monthly payments does not constitute a waiver of their right to expect the lender’s appointee to follow the rules. The fact that the borrower is in default does not authorize the mortgage investor and the trustee to disregard the Borrower’s protections set forth in the Deed of Trust and any incorporated regulations.

This holding is consistent with Virginia’s practice of conducting foreclosures out of court. The procedures set forth in the deed of trust provide the lender with a means of selling the property without the time & expense of a judicial sale. If the procedural nature of those rights is not preserved, then foreclosure disputes will go to court more often, depriving the lenders of the convenience of non-judicial foreclosure.

Ms. King alleged that the Foreclosure Trustee breached its fiduciary duty by conducting the sale prior to a required face-to-face meeting with the borrower. The Supreme Court of Virginia found that the Breach of Fiduciary duty claim was improperly dismissed by the Norfolk judge. The Court sent the case back down for consideration of damages.

These two new court opinions show how breach of fiduciary duty claims against foreclosure trustees require legal interpretation of the deed of trust. If the lender and trustee digress from its procedures, impartiality may be easier to prove.

What Difference Does It Make? Technical Breaches By Banks in Foreclosure

What is a Revocable Transfer on Death Deed?